Rehman speaks up for Polio survivors 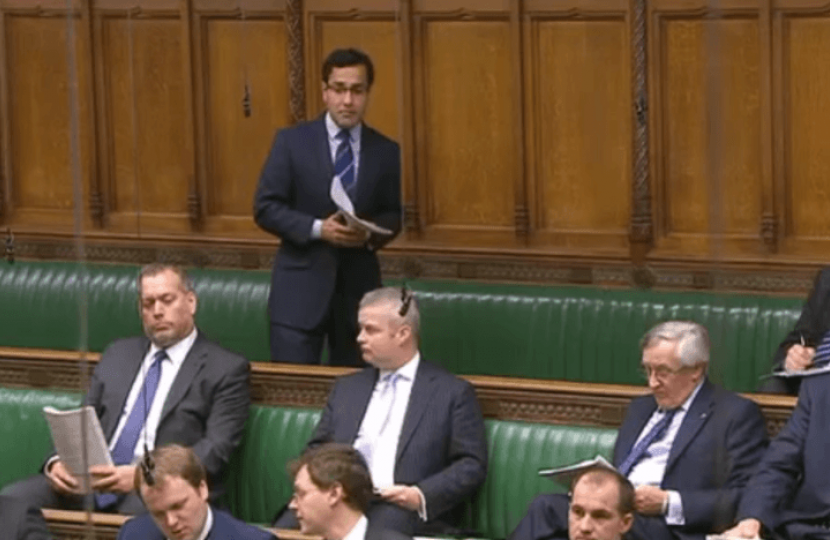 Rehman Chishti, Parliamentary Ambassador for the British Polio Fellowship speaks up for Polio survivors, in The House on 7 February

The Government agreed on Tuesday 7 February that more needs to be done for the 120,000 people in the UK living with Post Polio Syndrome (PPS). Rehman Chishti MP raised the topic of PPS in Health Questions in the House of Commons, as part of his new role as Parliamentary Ambassador for national charity The British Polio Fellowship.

Rehman started by asking the Parliamentary Under-Secretary of State for Health, David Mowat, what steps his department are taking to support people with PPS; David’s response was that the NHS focuses on structured self-management, pain relief, and increasing referrals to both physio and occupational therapy. David did go on to say however, that: “awareness of the condition is not as high as it could be,” and that more needs to be done with “the work of The British Polio Fellowship, on GP education, training and information.”

Rehman also informed the House of Commons that low awareness of PPS among GPs and the NHS more generally, is leaving patients living with the condition waiting up to six years for a diagnosis. David meanwhile confirmed to those present that The British Polio Fellowship had developed guidelines, Post Polio Syndrome: A guide to management for health care professionals, that everyone needs to use to build GP awareness of PPS.

Ted Hill MBE, CEO of The British Polio Fellowship says it’s encouraging news for people living with PPS that the Government are agreeing that more needs to be done to not only raise awareness of PPS within the medical sector, but in terms of helping those living with the condition as well.

“I was delighted to see the response of the Government on the issue of PPS in the Health Questions in the House of Commons,” said Ted. “To know we have such backing can only be good news as we look for the breakthrough in getting the word on PPS out there. I’m immensely grateful to Rehman for his amazing efforts so far as our new Parliamentary Ambassador, and look forward to working with him  on our Parliamentary strategy.”

To find out more about The British Polio Fellowship and to learn about the late effects of Polio and Post Polio Syndrome visit www.britishpolio.org.uk

About the British Polio Fellowship

The British Polio Fellowship is a charity dedicated to helping, supporting and empowering those in the UK living with the late effects of Polio and Post Polio Syndrome (PPS). It provides information, advocacy, welfare and support to enable its members to live full independent and integrated lives and works to develop worldwide alliances with other Polio and Post Polio groups for the mutual benefit of its members. Further information about the British Polio Fellowship and details on how to make a donation can be found at www.britishpolio.org.uk or by calling 0800 043 1935.

Post Polio Syndrome (PPS) is a neurological condition which can occur in up to 80% of those who have had Polio. It is estimated that around 120,000 people in the UK are living with PPS today.  After an interval of several years of stability, individuals can develop increasing weakness, fatigue and pain in previously affected or unaffected muscles, a general reduction in stamina, breathing, sleeping and/or swallowing problems and cold intolerance. PPS usually begins very slowly, although it can appear suddenly and often following triggers such as falls, surgery or immobility. There is no specific cure for PPS, but properly

managed it may stabilise or only progress slowly and lessen the cost on the NHS whilst increasing the quality of life of those affected. Much can be done to retain independence, including self-management  strategies such as pacing and energy management, appropriate use of adaptive equipment, looking after your general health, and social and emotional support.