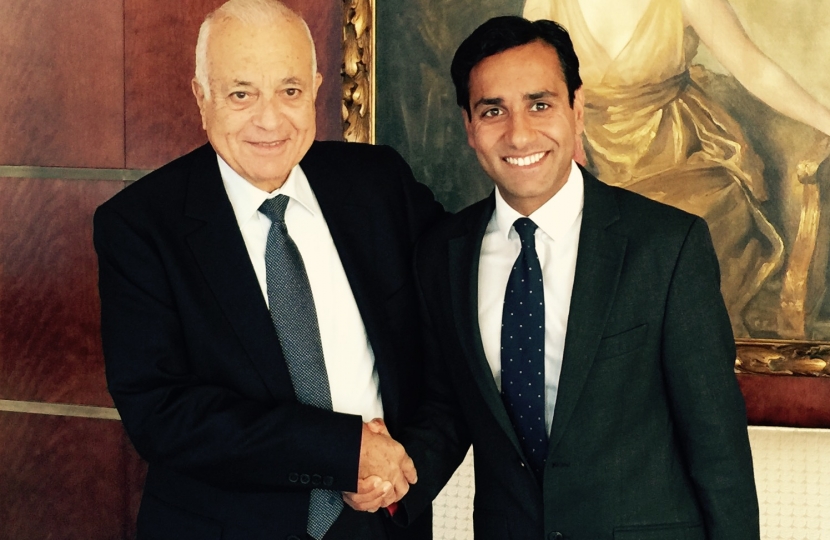 The Secretary-General of the Arab League, Nabil Elaraby, has given his support to the campaign to refer to the terrorist group as “Daesh” rather than the Islamic State or ISIS/ISIL.

Rehman Chishti MP, who has been leading the campaign to change the phrase used, met with the Secretary-General today on his visit to London to discuss how calling them Daesh can help to tackle its propaganda campaign.

They also discussed the current situation in Syria and Iraq as well as the ongoing migrant crisis.

The Arab League has 22 member states, including many which have officially adopted the term Daesh.

Mr Chishti’s campaign to refer to the so called Islamic State as Daesh continues to gain momentum. It has now received the backing of more than 160 Members of Parliament from across the political spectrum, including the Mayor of London, Boris Johnson MP, the former First Minister of Scotland, Alex Salmond MP, and the Chair of the Home Affairs Select Committee, Keith Vaz MP.

Many countries around the World, including France and Turkey, have already adopted the phrase “Daesh”, which is an Arabic name for the group, and holds negative connotations referring to “one who sows discord”.

Member of Parliament for Gillingham and Rainham, Rehman Chishti MP said:
"I welcome the support of the Secretary-General of the Arab League to this campaign to convince the Government and the media to officially adopt the term Daesh.

"The barbaric actions of this terrorist group demonstrate that it is not Islamic nor is it a state and Daesh is a better term that should be used, which is acceptable to many peace loving Muslims around the world and will assist us in defeating their poisonous propaganda campaign."