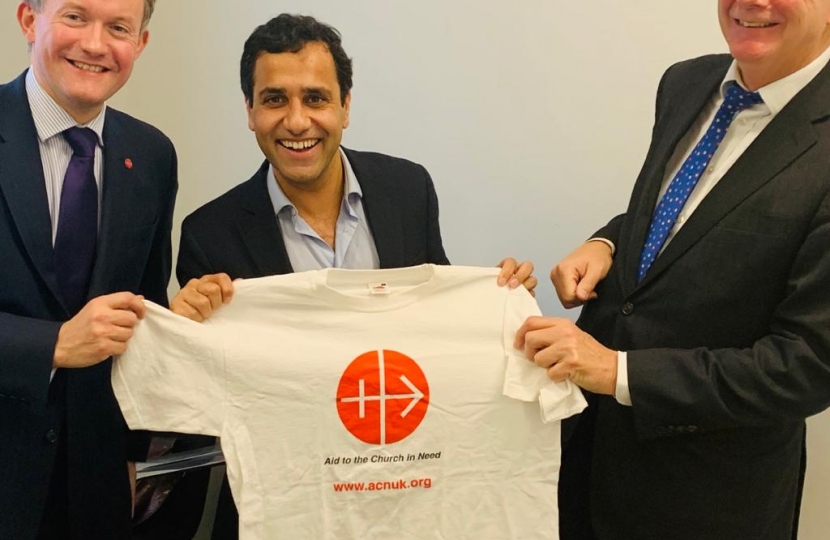 Prior to the coronavirus epidemic, Rehman agreed to run the Kent Spring Marathon on behalf of Aid to the Church in Need, a Christian charity which supports Christians who are persecuted or oppressed around the world.

You can learn more about Aid to the Church in Need on their website: https://acnuk.org/get-involved/fundraiseforacn/rehman-chishti-mp-marathon/

Rehman wrote an article explaining why he was running the marathon for ACN in the Catholic Herald, you can read it here and copied below: https://catholicherald.co.uk/why-as-the-pms-special-envoy-im-sounding-the-alarm-on-persecution/

Until coronavirus intervened, I was planning to run in the Kent Spring Marathon in support of Aid to the Church in Need (ACN).

So why would I, a Muslim, the son of an imam, wish to run for a Catholic charity? Because I believe the persecution of Christians must be eradicated. As an MP in a community with a rich diversity of religious communities, I believe passionately in the need to reach out to people of other faiths. As the Prime Minister’s Special Envoy for Freedom of Religion or Belief, I think it is of critical importance to collaborate with organisations committed to the cause of interfaith relations – groups and individuals willing to do so without compromising their own deeply held beliefs.

Indeed, my faith is so important to me that I couldn’t run this year’s London Marathon – as originally intended – because it falls within Ramadan when I will be fasting.

As someone who came to Britain from Pakistan as a child aged six, religious freedom is deeply personal.

I saw my father for the first time when I arrived in the UK. He had left Pakistan in 1978 following the military coup led by General Muhammad Zia ul-Haq. My father had taken up a post as an imam in the UK.

My father had been a federal adviser on religious affairs to the prime minister of Azad Kashmir before leaving for the UK. When I finally joined him here, with my mother and elder sister, we took our place as a free and respected Muslim family in a country with a long-held Christian tradition.

Meanwhile, back in Pakistan, General Zia was violently pursuing the “Sharisation” of the country. As we enjoyed our religious freedom here, Christians, Hindus, Ahmadiyya Muslims and politicians in Pakistan who opposed his anti-democratic and authoritarian form of government felt the noose of fundamentalism tighten around their necks.

In our secularised Western milieu, which is increasingly baffled by the pious religious practice exhibited by the majority of the world, many do not appreciate what a world without religious freedom looks like – or how horrifying it is.

A famous example of a victim of religious intolerance is Asia Bibi, the Catholic woman sentenced to death for blasphemy in Pakistan in 2010. Convinced that justice had not been served in her case, I advocated for her release starting back in 2012. To this day, Pakistan’s blasphemy laws are frequently abused to settle petty, personal scores. This affects all citizens of Pakistan, including the majority-Muslim population and minority communities alike.

When the Supreme Court of Pakistan acquitted Asia in 2018, my elation was short-lived. The UK Government’s response was an ill-judged refusal to grant her asylum. In protest, I resigned as vice-chairman of the Conservative Party and trade envoy to Pakistan.

It was through my advocacy on Asia Bibi’s behalf that I encountered the Catholic charity Aid to the Church in Need (ACN). I was impressed by its steadfast dedication to the victims of Christian persecution and its commitment to raising awareness of a cause few were willing to address. The projects the charity is carrying out in Pakistan – which include supporting blasphemy victims – show how ACN has been tackling the problem of persecution on the ground.

It is my great honour and privilege, therefore, to be running this year’s Kent Spring Marathon for ACN. As well as raising money for a charity which supports 5,000-plus projects globally, my wish is to help sound the alarm about persecution of Christians and flagrant religious freedom violations which affect millions of believers, of different faiths, around the world.

As the Prime Minister’s special envoy, it is my job to cement the UK’s position as a global leader in advocating for freedom of religion and belief. I am working hard on implementing the 2019 Bishop of Truro review into Foreign and Commonwealth Office support for Christians suffering persecution. So far, in the six months I have been in post, I have taken forward 10 of the review’s 22 recommendations and am in the process of developing plans for the implementation of the remaining recommendations.

The freedom to think for ourselves about the meaning of existence, to follow our beliefs and to develop our conscience, is what makes us human.

To be denied that is cruel. Britain must stand against those who oppress, persecute and abuse those who follow the “wrong” religion or belief.

I wanted to run a marathon for a Catholic charity because I think the persecution of Christians is a gross crime against humanity. Please support me, please support ACN and please support those who are persecuted for their religious beliefs. A world with religious freedom is something we need to strive towards – starting today.

Rehman Chishti is the MP for Gillingham and Rainham. To sponsor him in the Kent Spring Marathon in support of Aid to the Church in Need, visit acnuk.org/marathon

Rehman speaks with constituents' family regarding travel back to the UK